Adopting an animal will totally change its life, in every way possible. As amazing as many animal shelters are, most of them are bursting at the brim with stray animals and are simply unable to give each one of them the personal love and care that they so desperately need. Besides that, every cat and dog deserves a forever home. Too many strays are wandering the streets without anyone to care for their health needs or general wellbeing. Thankfully, a recent heartwarming story offers some hope. One year after a young, sad-looking stray cat was adopted, he is totally unrecognizable – in the best way possible.

The whole story began when Sandra saw a post from the Animal Humane Society in Minnesota on International Cat Day. In the post, the organization showed a sad-looking orange cat who was “the sweetest and the most affectionate boy around” but just couldn’t find a home. Sandra couldn’t stand to see that sad face and knew instantly that she had to do something. Unfortunately, her lease did not allow pets, so she decided to pay him visits at the shelter until he found his forever home. However, she eventually realized that no one would adopt him because of his health issues., which included an eye injury, and virus, and multiple infections. That was the moment she realized she had to adopt this cat. One month later, she was able to convince her landlord that the 6-year-old cat, now affectionately called Mr. Willis, deserved a good home. One year, later, Mr. Willis has gone from being the saddest cat to the happiest one – a process that Sandra has documented on Mr. Willis’s personal Instagram account, @mywillisthecat. Currently, they have over 94.4k followers. And it’s pretty easy to understand why. 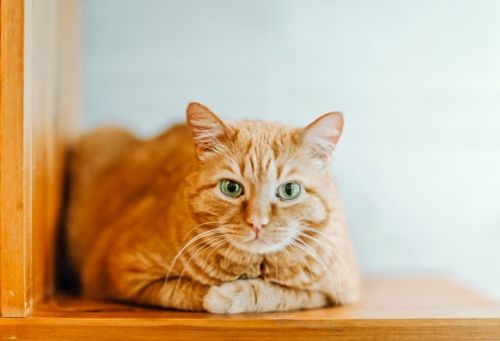 “I saw Mister Willis the first time in a post that the Animal Humane Society in Minnesota uploaded in August last year,” Sandra told BoredPanda in a recent interview. “There was something about his eyes that just spoke to me. He looked so sad. I knew I couldn’t do anything about it since my lease didn’t allow pets and I was also not planning on getting a cat. Even so, I had to go and visit him. He looked even sadder in real life and I had to leave after only a couple of minutes because it was so heartbreaking. For some reason, I kept going back to visit him.”

Eventually, she revealed the happy ending of their story, adding, “I’ve had him for a year now and we’ve had our ups and downs. He was very sick for a while and we had to go to the vet all the time. Luckily, he was able to fight off all the infections and today, he’s a happy and healthy cat.”