Adorable Things That Dogs Do

Dogs are one of the most popular pets in the world. How many kids have requested a puppy for their birthday or Christmas? There’s a reason we all love dogs so much, and it’s not just because they’re one of the most loyal creatures. As well as their undivided love and attention, dogs also provide us with hours of entertainment, and they’re just so darn cute when they do it.

Almost all dog owners will unashamedly admit to talking to their dogs, and say that their dogs understand. Dogs will often tilt their heads when their owner is talking as if to say ‘did I hear that right?’ in an adorable way. The cuteness is amped up even more when they employ the famous ‘puppy dog eyes’, although not restricted to puppies. Dogs of all ages raise their inner brows to make their eyes appear larger and thus melting our hearts.

Dogs often have a tendency to get attached to things, like when they run along with a stick that’s triple their size and prevents them from going through doorways. And sometimes they don’t quite understand their own size. Particularly when a big dog is trying to sit on their human’s lap or get into a kid’s toy car, and just stare back at you like ‘what?’

Coming home to your dog after a long day makes you feel like you’re the only thing that matters in the world. Your dog recognizes your patterns and knows you’re on the way home, long before the key enters the door. And in case you think they were bored while you were out, dogs have their own ways of entertaining themselves, like chasing their own tail for hours on end. 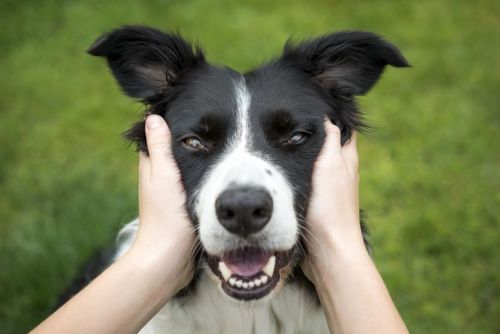 This doesn’t mean you don’t have to P-L-A-Y with them or take them on a W-A-L-K to the P-A-R-K. Dogs are very good at picking up words that they associate with positive things that will benefit them. They may even bring you their favorite to and just stare at you until you get the hint. And when you do eventually take them on a W-A-L-K, dogs have an adorable habit of constantly checking back to make sure their human is still there.