Made with condensed milk and cocoa powder, brigadeiro is a traditional Brazilian chocolate truffle. Even though the dessert is now considered a classic, it was only created in 1946. At the time, Brigadier Eduardo Gomes was a candidate for the Presidency of Brazil and one of his supporters came up with the idea of naming a confection after him.

At first, the dessert was sold by women who supported the presidential candidate, as it was the first election in which they were able to vote. But over the years, the confection started to take a life of its own. Nowadays, there are numerous stores around the country that only sell brigadeiro. These shops are called brigaderias and they offer numerous flavors of the classic dessert, such as Nutella, coffee, cookies, peanut butter, coconut, and caramel. 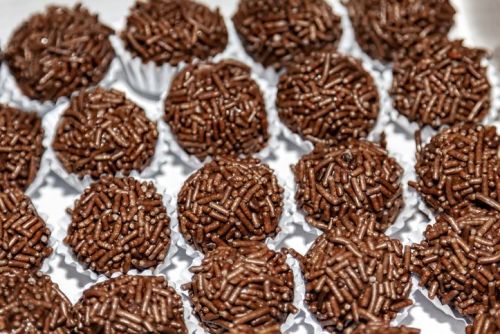 If easy and tasty are the two adjectives you use to describe your favorite recipes, you will love to recreate this one at home. To start, melt some butter in a pot over low heat. Then, add a can of condensed milk and 1/4 cup of cocoa powder. Stirring continuously, pay attention to the bottom of the pot. Whenever you are able to see it for more than 3 seconds after dragging the spatula through, the dessert is ready. Next, just pour the fudge-looking chocolate onto a greased plate and let it chill for about an hour. Once the dessert is at room temperature, shape and roll it in sprinkles. Voilà!