Many of us consider our pets to be among our best friends. After all, we do spend lots of time together, share our food with them, and even go to sleep with them. So we’re usually pretty sure that we know everything there is to know about our furry, four-legged friends. However, that is clearly not the case! Just recently, a man named Cole Clark from the UK just discovered a secret about his 11-year-old cat Tula that is honestly pretty hilarious. Apparently, the long-haired Siberian feline had been sneaking out to local chain restaurant Toby Carvery and begging for food. Her owner would never have known about his pet’s amazing double life if the restaurant hadn’t decided to send home a note with her one day.

Clark had always allowed his Tula to roam around town without giving to much thought as to where the fluffy cat was going and what kind of adventures she was having. However, one weekend, he found out in the most incredible way, when Tula returned home with a paper collar that wasn’t there before. After unfolding the collar, Clark discovered that there was a note written inside, which read, “Does this cat have a home. Always at Toby Carvery.” This note totally opened up Clark’s eyes to the secret adventures his cat was embarking on every day. Tula had clearly been living a double life, heading to the local restaurant chain each day to beg for meat. 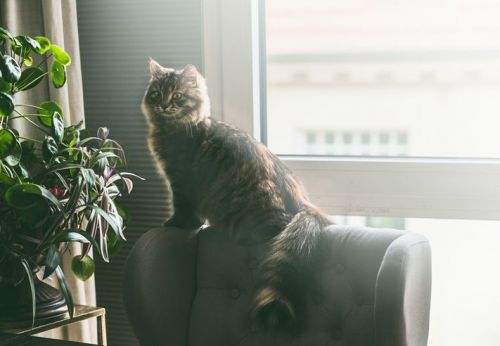 The owner is apparently not at all surprised about his cat’s bold adventures. While Tula has a warm home and plenty of food at home, her love for meat drove her to seek out new snacks at the local carvery chain – and she definitely succeeded in getting them. The staff were undoubtedly amused by the long-haired Siberian’s daily visits and would lavish him with prawns and other delicacies. It’s not clear whether Tula will continue her daily escapades now that the jig is up, but we have a feeling that she’ll find a new way of surprising her owner – and the rest of the internet.