As anyone who owns a cat knows very well, these fluffy little (and sometimes not so little) beings just love to get into every little nook and cranny. From washing machines and laundry baskets, to plant pots and that gap behind your closet that you didn’t know was there. Ask any cat parent, and they’ll readily tell you how their fur babies prefer sitting inside the cardboard box that was just delivered, rather than playing with the exciting new toys that were purchased for them.

This may bring with it some frustrations, but fear not, it sure does supply some entertainment for any humans involved. Imagine wondering why your milk bottle seems a bit furry, only to discover that it’s just the new kitten taking a nap. Or wondering why the blanket you draped over the chair just blinked at you, when actually it’s just Mittens who paused mid-stretch because she found a new comfortable position. 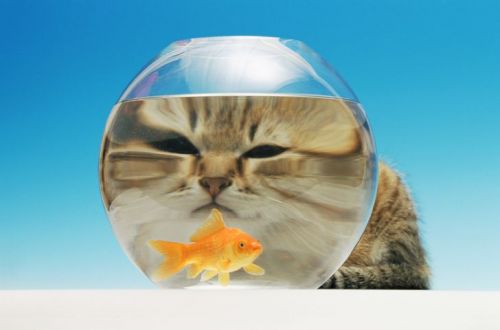 While squeezing into small places provides a sense of security and makes cats feel safer than being openly exposed, sometimes they just beg the question “how?!” Cats are also known to squeeze through the tiniest gaps and sprawl out across multiple objects simultaneously(often spread apart at quite a distance from each other). At first sight, cats appear to be purely solid. However, based on their ability to manipulate and mold their bodies like no other animal, this seems unlikely.

The reason cats are so flexible is due to the fact that they have more bones in the spines than humans, giving them a super-elastic spine. Additionally, their shoulders are only attached via muscles, and their collar bones don’t form joints with other bones. All of this gives them the ability to adapt to the shape of what is surrounding them. By definition, a liquid will change shape to fit the container that it’s poured into. If this isn’t proof enough that cats are liquid, then what is?