Glass frog is the common name given to amphibians from the family Centrolenidae due to their translucent abdominal skin. Native to cloud forests around the world, numerous glass frog species have been found to this day: thirteen of them have been identified in Costa Rica while the others live in Central and South America. This animal is mostly arboreal, living along rivers and streams during its breeding season. 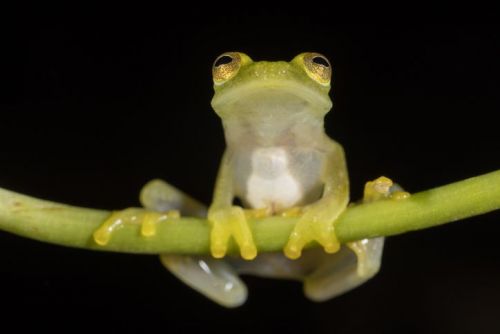 The glass frog is usually pretty small, ranging from 1.2 to 3 inches in length. While the skin along the lower surface of its body and legs is translucent, the rest of its body is mostly green. Thanks to its green and transparent skin, this nocturnal frog has the ability to camouflage itself during the day on the underside of leaves.

In fact, its partly clear abdominal skin was found to barely change against darker or lighter foliage, which initially made scientists wonder about the glass frog’s evolutionary advantage. But it turns out its legs are more translucent than the rest of its body, which allows it to change in brightness. This means that the edge of the frogs’ bodies looks softer, making the outline of the animal less noticeable in contrast to leaves. As a result, these frogs are less visible and subsequently less attacked by predators in the wild.