Clever Street Cat Leads Woman To The Pet Food Aisle, Then Gets Adopted

Cats, as a species, are very clever creatures. Even housecats who have been long domesticated are incredibly swift and nimble and always have a few tricks up their sleeve. But due to their tough living conditions, street cats are especially capable. They have to be. Alertness and resourcefulness are crucial qualities for street cats to possess in order for them to survive on the streets without going hungry or getting hurt. And in a recent heartwarming story, one stray cat’s cleverness got it a delicious meal – and a happy new home.

It all started when 33-year-old Tania Lizbeth Santos Coy Tova was outside of her local supermarket in Piedras Negras, Mexico. The primary school teacher spotted a small white cat that was missing its tail, and couldn’t help but reach down to pet him. As soon as she started stroking him, the cat instantly took to her. Then, apparently sensing that he could trust her, the cat began to follow her into the supermarket. What happened next was pretty amazing. 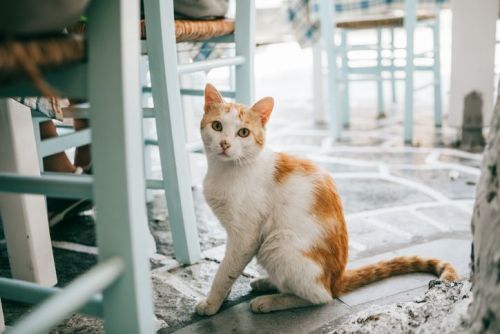 The cat led her straight to his favorite aisle – the pet food aisle – and gestured towards his favorite food. He must have been waiting for someone to feed and finally stumbled upon a kindhearted person. But that wasn’t even the best part of his day. Tania decided that she couldn’t just leave the sweet cat there, and decided to take him home with her. Today, that cat is named Conejo, which means rabbit, because of his tail situation. Tania posts plenty of pictures of him on Instagram, and it’s clear that he is happy in his new forever home. When she first adopted him, Conejo had lots of wounds from street fights and mistreatment by people. Now, he has medical care, toys of his own, and most importantly, a loving home.