Cats are curious and social creatures, and while they may be independent and have a bad rep of being indifferent, research has shown that they do also love spending time with their owners. While some other pets (dogs, we’re looking at you) may be happy, enthusiastic and easily satisfied, cats have their own unique way of showing affection.

A common way for a cat to show that she loves you is by rubbing its head on you. This behavior is known as ‘bunting’. Pheromones are released from the cat’s head, and this is essentially its way of saying “mine”, and marking you as its own. Cats will also touch noses as a form of greeting each other, kind of like a handshake. This also allows them to sniff out where the other one has been exploring and sniffing. 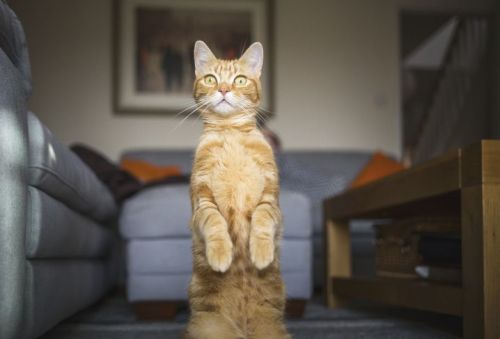 Cats often bring their owners “gifts”. While sometimes this may be a bit gross for the human involved, (who wants to see a dead mouse on their doorstep?) behaviorists suggest that this is a cat’s way of acknowledging that you’re part of the same group, and sharing the success of hunting, or perhaps a way of saying thanks for taking care of it. Because cats spend a lot of their time sleeping, they have a lot of pent-up energy. This is usually exerted in short bursts, known as the ‘zoomies’, often in the middle of the night when the humans are trying to sleep.

One of the cutest habits that cats portray is kneading; pressing and massaging their paws. The instinct to do this stems from when young kittens are nursing from their mommy cat. Adult cats still exhibit this behavior either when they are content, or as a way to alleviate stress. In addition to grooming themselves, cats will sometimes groom each other. This is usually a sign of affection and occurs between cats that have strong social bonds.