Decorator Crabs: The Best-Dressed Creatures In The Animal Kingdom

Shells, sponges, algae. These are just some of the ornaments used by decorator crabs to camouflage themselves in their surroundings. Part of the Majoidea superfamily, these marine animals are known for their fascinating camouflage technique which allows them to protect themselves from predators. Using hair-like structures, decorator crabs stick sedentary plants and animals to their bodies in order to hide from predators or even ward them off. 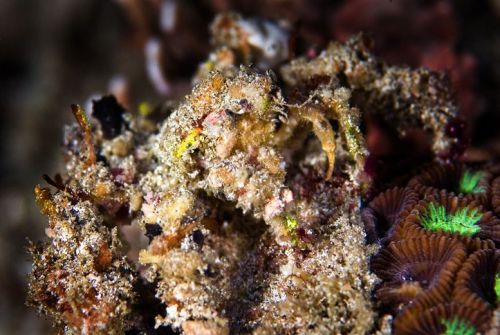 Decorator crabs were first discovered in 1889 by English biologist William Bateson. He observed the way these animals fix materials on their backs and noted that if they get cleaned, decorator crabs will immediately begin to clothe themselves again with precision. A year later, biologist Edward Bagnall Poulton classified the different colors chosen by these animals as warning colors and protective mimicry.

When it comes to their fashion choices, each species of decorator crab has a favorite type of outfit. For example, Pelia tumida crabs decorate themselves with sponges only, while Stenocionops furcata crabs prefer using the sea anemone Calliactis tricolor to camouflage their carapace. Interestingly, the relationship between decorator crabs and the animals on their shells is often mutualistic – the animals used for camouflage feed on whatever the crabs leave behind. In fact, some crabs are large enough to defend themselves so they don’t make an effort to decorate – but plants and animals latch onto them anyway in search of protection.