Known for its beautifully colored bark, Eucalyptus deglupta is a species of tree native to the Philippines, Indonesia and Papua New Guinea. Also called rainbow eucalyptus, Mindanao gum or even rainbow gum, this species is a rare one among the other 700 Eucalyptus species: it is the only one that lives in rainforests and one of only four Eucalyptus species that do not exist in Australia. 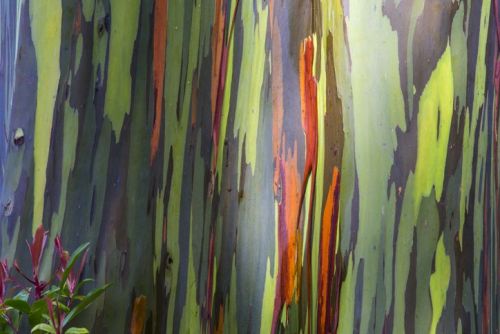 It was German-Dutch botanist Carl Ludwig Blume who first described E. deglupta in 1850 after collecting material in the mountain forests of the Indonesian island of Sulawesi. Growing in lowland and lower montane rainforest, this fast-growing tree can gain up to three feet a year – reaching a height of up to 246 ft with a diameter of 94 in. Its orange-tinted bark naturally sheds in strips, revealing beautiful streaks of green, red, orange, purple and gray. Besides, it is naturally resistant to pests and diseases.

The rainbow eucalyptus has numerous uses. Its thin layers of bark are a source of pulpwood used to make white paper – in fact, it’s the main species of tree used for pulpwood plantations in the Philippines. In frost-free areas such as Hawaii, Texas, Florida and Southern California, Eucalyptus deglupta is planted as an ornamental tree. Besides, its bark is also used to grow new trees in numerous locations around the world, including a grove of trees in Maui, Hawai, and the Fairchild Tropical Botanic Garden in Florida.