Despite having the potential to weigh up to 250 pounds in the wild, pandas are incredibly cute creatures. With their big black eyes, snubby noses and large round heads, they essentially remind us of babies. This is why scientists believe that humans find them so adorable, despite the fact that they can actually be quite boring and sit around all day. They spend around 10-16 hours a day just eating bamboo, and when they do ‘talk’, they actually sound like sheep.

Unlike other similar big creatures, pandas do not hibernate. This is because their diet of bamboo does not provide them with enough fat to store and sleep through the winter. But that’s okay, since pandas aren’t bothered by the cold, and have been spotted wandering through thick snow in bamboo groves. These cute fluffy creatures have a funny walk due to the way their front paws point inwards. And their giant faces aren’t actually chubby, but rather a result of their large cheek muscles that are required to chew bamboo all day. 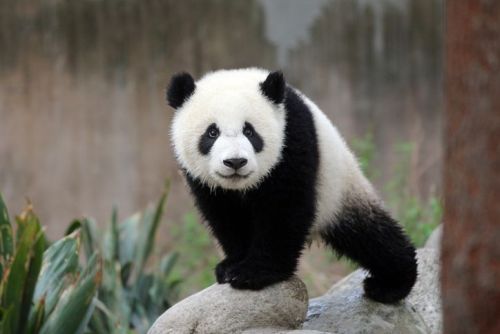 These iconic black and white fluff-balls might stand out in a forest, but pandas actually do this to camouflage in mountain environments. The white helps them blend in with the snow, while the black allows them to disguise themselves with the more shadowy parts of the mountains. But pandas aren’t born black and white. Baby pandas weigh around 100 grams and are born with no fur, with the appearance of giant pink beans. They’re completely helpless, until their fur starts growing after 2 week, and their eyes open at 3 weeks. It only takes around 2 years for pandas to become fully grown.

Sadly, despite having no predators, pandas are an endangered species and have been declared vulnerable. Even though we adore them, as our population grows, more of their habitat is destroyed. We do appreciate them though; in China, the panda has been a symbol of peace for a long time. During wars, tribes would raise a flag with a panda on it to call a truce and cease the battle. The symbol is also used in Chinese philosophy to demonstrate the peace and harmony brought by the balance of the Yin and Yang.