These fur-covered small marsupials can be found on some small islands off the coast of Western Australia. They are objectively extremely cute, mainly thanks to their small black noses and little faces. They always seem super happy with their photoshoot-ready smiles, or at least that’s the way their mouths are shaped. Just like dogs, quokkas open their mouths to pant when they’re hot, which sometimes looks like a super big smile, and makes us grin back in response.

Often referred to as the happiest animal on Earth, but originally mistaken for giant rats, quokkas can be extremely playful as well as cute. #QuokkaSelfies became quite a popular trend in social media, with famous people from all over the world snapping the iconic selfie. The best times to spot a quokka are early evening or early morning since they are nocturnal creatures. They spend their days resting and sleeping and are often found in tall grass near water, in small family groups. 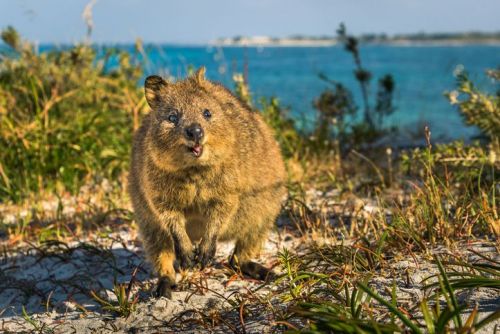 Quokkas live on average for 10-15 years and come from the same family as kangaroos and wallabies, known as the Macropodidae, all of whom are herbivores and native to the Australian continent. Just like other animals from this family group, baby quokkas are called ‘joeys’ and are born around 27 days after mating. They stay in their mothers’ pouch for around 6 months before venturing off independently. Unlike their bigger family members, quokkas can climb trees up to 2 meters high, usually on a quest for food.

Since rabbits are pests in Australia, the scene at Easter time is quite different. Instead, native animals such as bilbies give bunnies a run for their money. In 2017, one chocolate company released ‘Chokka the Quokka’ and donated a portion of the profits to conserving the quokkas on Rottnest Island. This island was actually named after them when the Dutch thought the island was infested with rats, which turned out to be quokkas. They are not territorial animals and love to share space, shelter, and food.