With viral videos of people going around public places and sneakily sticking them on to all sorts of items, googly eyes have recently made a comeback.  This fun and lighthearted trend has brought a smile to many people’s faces. One guy went into a grocery store and stuck them on a variety of things to bring them to life. We wonder what it must have been like for an innocent bystander to arrive home and open an egg tray to find one looking right back.

People have been putting them on packaging that has pictures of people on it, like children’s toys and DVDs. By placing them exactly where the eyes are, the person on the cover instantly becomes a source of laughter. Think of the Steve Jobs pose, but with googly eyes, or the cute little baby on the outside of diapers, yawning, with two googly eyes staring right at you. Even cute little dolls had a pair stuck on over their eyelids. Movie stars weren’t spared either, with a poster of Nick Fury and his eyepatch, coupled with a single googly eye. Suddenly the world doesn’t seem in grave danger anymore. 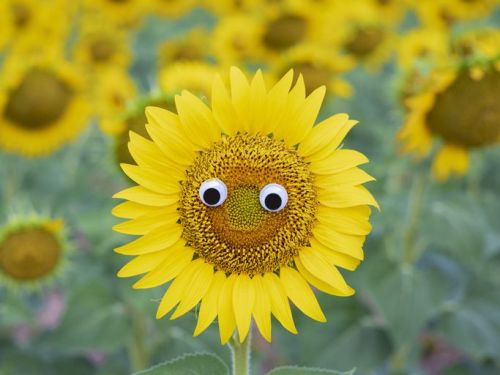 In Bulgaria, a street artist took it to a whole other level, by sticking them on things in the streets. There was a giant concrete ball that had cracked near the bottom, with the addition of two giant googly eyes, it now looks like it’s sulking. They were also stuck above drainpipes, turning the exit into a mouth that looks like it’s permanently in shock. Even a stain on the sidewalk was turned into a frog by the simple addition of these hilarious stickers.

People everywhere have been uploading pictures of their sneaky sticker antics. One office worker managed to stick them on the tip of the shoe of the guy in the cubicle next door. That’ll teach him from sticking his feet into the next cubicle. Statues, street lights and post boxes have all been subjected to this trend as well. Almost nothing has been left untouched. Whether it’s making a face out of some inanimate or making serious poses look silly, this craze is definitely an entertaining one.