April 8th is the official National Empanada Day. What are they, you may ask? They are a stuffed pastry or bread that is either fried or baked. And both varieties are seriously delicious. 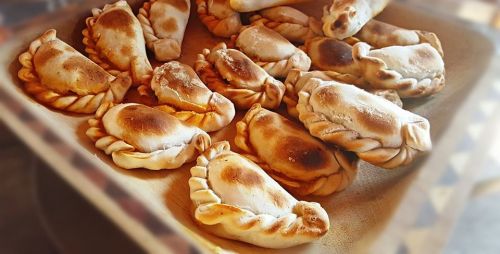 The name itself comes from the Galician.   In Spanish and Portuguese, the verb em pandar, means to coat or wrap in bread.  This special food is made by folding the bread/dough over a seasoned stuffing, which is most commonly filled with vegetables, meat and cheese.  It can however be made with several other ingredients.

The meaning of an Empanda is different from region to region. In the Southwestern and Southern areas of the United States, they are best known as Creoles, and are a half-circle flaky crust that are filled with cheese, beef, chicken, or pork.   In New Mexico, it is considered a Christmas tradition and are filled with sugar, pin nuts, cinnamon, nutmeg and ground pork.  They are then deep fried in lard.

If you’d like to observe this tasty holiday wherever you may be in the world, post a picture of yourself enjoying an Empanada and hashtag it #NationalEmpanadaDay.