Huang Yung-fu: The Painter Who Saved His Entire Village With Art

Huang Yung-fu was 86 when he heard the military village he called home was going to be demolished. “Ten years ago, the government threatened to knock this village down,” Huang told the BBC. “But I didn’t want to move. This is the only real home I’ve ever known in Taiwan, so I started painting.” 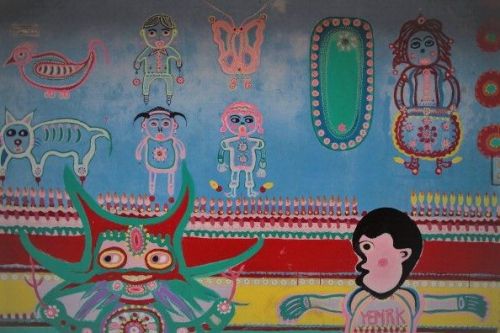 Born in China, Huang left home at 15 to fight the Japanese in the Second Sino-Japanese War. After World War II, he joined the fight against Mao Tse-tung and the Communist government until 1949 – when the People’s Republic of China was created. That year, two million troops and their families fled to Taiwan and were housed in 879 military dependents’ villages scattered across the island.

When he finally retired in 1978, Huang Yung-fu moved into a bungalow in the village where he had lived for the past 40 years of his life. However, unfortunately, his settlement wasn’t the same as it used to be in 1949. Over the years, many military dependents had abandoned their homes as the dream of recapturing mainland China seemed to fade. As a result, the poorly built houses started to deteriorate. In the 1980s, the Taiwanese government began a campaign to demolish the settlements.

By 2008, Huang was the last resident left in his settlement. When he received a letter from the government ordering him to vacate his home, the soldier did the only thing he could think of: he started painting. First, he painted a bird in his own bungalow. Then, he kept painting until he ran out of space. So he took his art to the abandoned buildings in his village.

In 2010, after finding out about Huang’s Rainbow Village, several Taiwanese citizens contacted the mayor of Taichung urging him to preserve the settlement. A few months later, the remaining buildings and streets were officially turned into a public park. To this day, Grandpa Rainbow wakes up every morning to paint his village like it still depends on it.