Marvin the cat was adopted just six months ago, by Mary Barnes, who wanted to provide Moose, her seven-year-old dog with a friend to keep him company. And while Marvin surely did just that, he also exceeded all of Mary’s expectations, providing Moose with far more than just your average friendship.  In fact, Marvin the cat now helps Moose deal with his anxiety due to loud noises. So when storms hit or fireworks set off, Marvin is always there for his buddy Moose.

Ever since Mary Barnes and Moose moved to the hustling and bustling downtown Detroit, Moose became highly sensitive and anxious about loud noises coming into the apartment.  Moose was so terrified that she would tremble and even go hide into the shower – feeling as though it was her only safe place.  And although Mary tried just about everything to calm him down, nothing seemed to work, which is why she decided to get a new addition to the family, Marvin the cat! 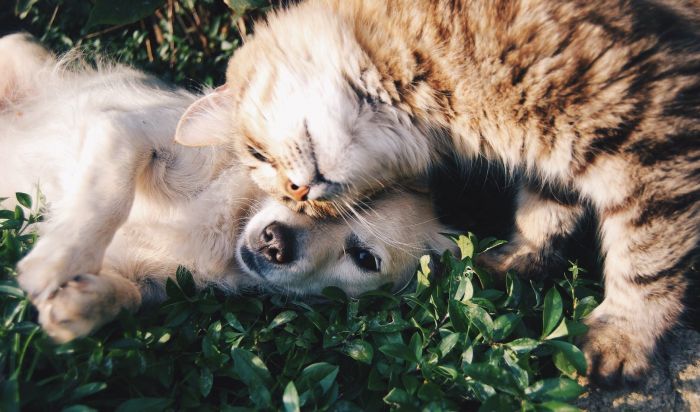 Mary thought that perhaps having a friend around would help Moose feel less lonely, and in turn, less scared of all the loud noises. Although Moose had never had any previous interactions with cats before, somehow these two became the very best of friends right away, cuddling and playing together literally all day, every day.  And while Marvin never feared rain before, when a storm hit, he started to worry about Moose, his big sister and refused to let her deal with her anxiety by herself.  He would come to check up on her in the shower and kiss her endlessly to distract her from the scary noises.  Marvin is now Moose’s guardian angel and is always there for her when a storm or loud scary noise comes about.  Mary never could have believed the incredible impact that Marvin would have on Moose’s life.