Officially called the Inner Harbor Water Wheel, this googly-eyed trash interceptor is the pride and joy of Baltimore, Maryland. Since 2014, Mr. Trash Wheel has been working hard to remove trash from the Jones Falls rivers and keep the water clean. This wonderfully designed moored vessel is powered by water wheels and solar cells, generally drawing power from the river’s current, but using solar energy when the water isn’t enough to generate enough electricity. 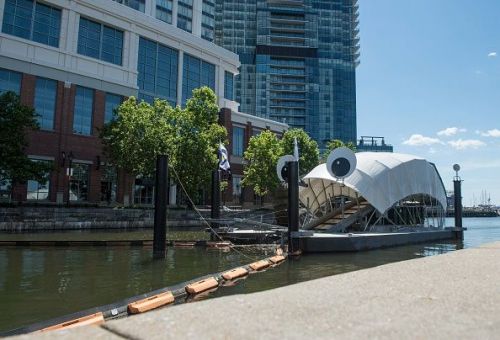 Invented by John Kellett, the vessel is part of the Waterfront Partnership of Baltimore’s “Healthy Harbor Plan”, which has an ambitious goal of making the water swimmable and fishable in the near future. Shortly after its inception, in 2016, Mr. Trash Wheel achieved a very impressive feat: it collected its 1,000,000th pound of trash. This was quite a milestone for the trash inceptor, but Adam Lindquist, director of the Healthy Harbor Initiative, explains that he would rather not celebrate it: “People need to realize that this is their trash and that it was heading straight for the Harbor and the Chesapeake Bay. It’s time we got serious about changing the behaviors that keep our neighborhoods and our Harbor from being as clean and healthy as they should be.”

In 2020, Mr. Trash Wheel was recognized by the Guinness World of Records for “Most Floating Debris Removed by a Trash Receptor in One Month”. Between the 1st and 30th of April 2017, the vessel removed 63.3 U.S. tons of debris from the mouth of the Jones Falls River. Seven years after its inception, Mr. Trash Wheel has removed over 2.5 million pounds of trash and debris from the Baltimore waterways.