In case you were wondering, sock monkeys are stuffed toys that are made out of socks, and also look like monkeys with super long limbs. Typically, they’re brown and white, with vibrant red lips and have a long tail. The craze for imitation stuffed animals for children spread during the later part of the Victorian era, which coincided with the Arts and Crafts Movement that elevated decorative arts. 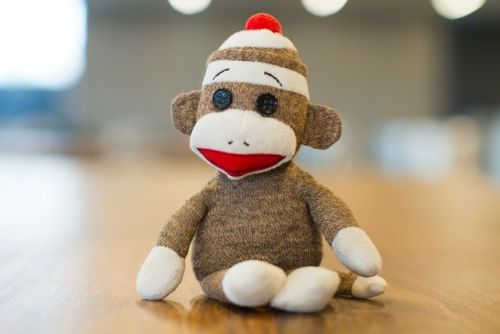 Crafters began sewing stuffed animals for children, at the same time as sock knitting machines were founded. After John Nelson received his patent for these machines, other people started flooding the market with similar socks. After a couple of decades, the first Red Heel Socks were introduced to the market, to set the Nelson socks apart. It is said that this red heel is responsible for the bright red mouths of the iconic sock monkeys.

No one is sure about who made the first sock monkey, but they have since become one of the most popular gifts for a variety of occasions. In order to celebrate this day, you can gift a sock monkey to someone you love. You can go ahead and purchase from the many available stores, or you can channel your love and try your hand at fashioning one yourself. All you need are some basic sewing skills, a few socks and some stuffing.

Turn your clean socks inside out and lay them flat with the heels facing up. From the open side, cut in a straight line down the middle, until around 1 inch from the heel, splitting the sock into 2 legs. Sew along the inner side of each leg, stopping around 1 inch from the end. Turn the sock back to outside in, stuff the legs, and seal them shut. Tie a ribbon or some string around the top third of the body, to create the head.

Using a second sock, mark out the ears, tail, nose and arms, and cut them out. You might find it helpful to print off a template from the internet. Stitch the length of each arm, and of the tail. Sew together the curved sides of the ears, and then turn all the pieces the right side out, and stuff them. Now you’ll need to stitch the arms and tail to the body, as well as the ears and the mouth or nose. Your gift is now ready.