If you’re a Disney fan, you have probably heard that Sleeping Beauty’s castle was inspired by a real-life palace. Located in the gorgeous Bavarian Alps in Germany, the Neuschwanstein castle was Walt Disney’s biggest inspiration when creating the iconic Disneyland castle.

Originally built for King Ludwig II of Bavaria, the palace was a tribute to his favorite pieces of art and poetry. Known as “The Eccentric King”, he commissioned a castle built high above the village on a steep rock. Tucked away in the beautiful German Alps, the 65,000-square feet palace’s location was carefully chosen. The king wrote to a friend, “the location is one of the most beautiful to be found, holy and unapproachable, a worthy temple.” 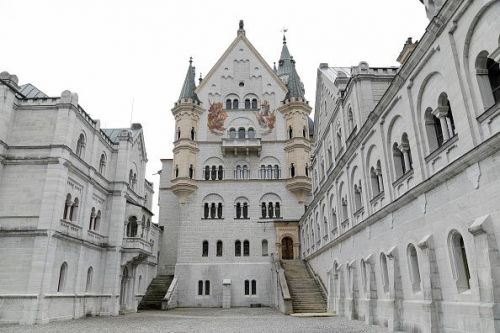 Before opening his theme park in 1955, Walt Disney took a trip to Europe with his wife Lillian. During their stay in Bavaria, the couple visited the Neuschwanstein Castle and it immediately made an impact on Disney’s vision. Unlike the traditionally dark Medieval castles, Neuschwanstein was painted in bright colors and was located in a beautiful fairytale-like landscape. From the interior of the castle, the views of the Black Forest and the German Alps inspired the American entrepreneur to create his own version of the majestic palace.