The world can be a cruel and unfair place. But sometimes, there is a ray of light that gives hope to us all. Such was the case just recently in Australia when an orphaned baby wombat was miraculously found alive in his dead mother’s pouch. Weighing a mere 120 grams, the baby was rescued by a good samaritan who found her completely alone in the world after her mother had been killed by a car accident. Right away, the orphaned baby wombat was taken to ACT Wildlife, a wildlife care group in Canberra. Although she was found to be weak and underweight, the baby proved to be stronger than she looked. Today, a little over six months later, Elsie has found her “forever” home, complete with a new “mom” named Helen, who will care for her until she is ready to go back out into the wild. Bored Panda recently sat down with Elsie’s last caregiver Lindy, who shared touching details of Elsie’s rescue and inspiring recovery story. 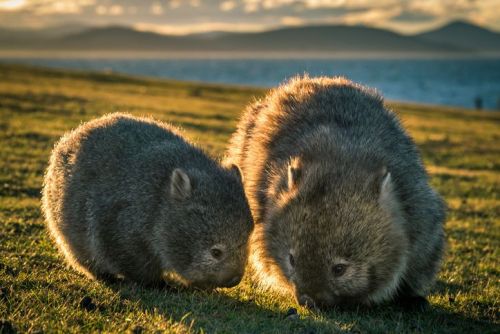 “She was rescued by a member of the public who saw the dead mother (hit by car) by the road. She removed Elsie from the pouch and brought her to ACT wildlife, which is the wildlife rescue and care group in the ACT (Australian capital territory),” Lindy shared. She continued, adding, “Elsie was almost three months old and 120 g (they are born about the size of a bean and only a few grams.) She had no injuries from the accident, with the exception of some damage to the inside her mouth from coming off the teat in the accident. But she had wombat herpes (almost half of wild wombats have this) and a staph infection, so needed treatment for those straight away. Her vet care has been provided by some amazing local vets at no cost to our charity. We are incredibly grateful for this support.”