The Cebuella pygmaea, popularly known as pygmy marmoset, is a tiny monkey native to the rainforests of South America. This animal is famous not only for being the smallest monkey in the world, but also one of the smallest of all primates. While at birth this primate only weighs 0.4 ounces, it reaches around 5 oz as an adult. Although its tail could grow to be as long as 9 inches, its body is only 5.9-inches tall.

The pygmy marmoset is usually found in the western Amazon Basin in countries such as Brazil, Colombia, Ecuador, Peru, and Bolivia, more specifically in river-edge forests. It is very well-adapted for arboreal life, having sharp claws to cling to trees and the ability to rotate its head a full 180 degrees. Besides, this tiny animal can leap up to 16 ft between branches. When it comes to its diet, the pygmy marmoset has a very specific one. It eats mainly tree gum, which it obtains by gnawing holes in the bark of trees and vines. Once the sap puddles up in the hole created by the pygmy marmoset, it laps it up with its tongue. 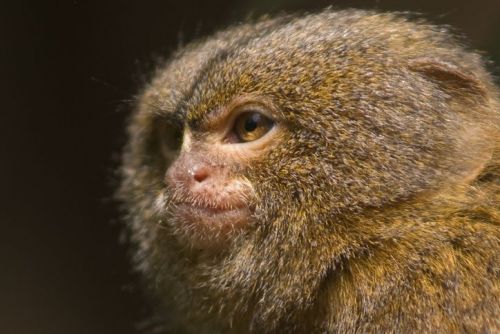 And how does this tiny primate live? The pygmy marmoset lives in troops of two to nine individuals, usually all family members – but sometimes more than two adults could be part of the same group. In this troop, they communicate using a very complex system that includes vocal, chemical and visual signals. These three main calling signals depend mostly on the distance that the call needs to travel.