It’s been over 80 years since a new type of chocolate was introduced to us. When Nestle gave us white chocolate, it was met with mixed opinions. As yummy as it is, white chocolate doesn’t contain any chocolate solids or cocoa powder, so technically, it doesn’t qualify as chocolate. Yet today it is still widely accepted as one of the main types of chocolates.

Until recently, there were only three kinds of chocolate: white, milk and dark. But in 2017, a new fourth type of chocolate hit the shelves; ruby chocolate. First released at a private event in Shanghai, it later went mass market in Japan and South Korea in the form of a KitKat. 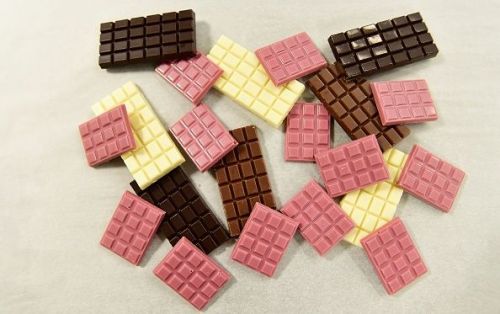 In 2004, a new type of cocoa bean grown in Brazil, the “ruby” cocoa bean, was discovered by Callebaut, a Belgian chocolate brand. And in 2009, the company registered a patent for the unique processing technique that results in the pink chocolate. In addition to these luscious pink tones, another identifying quality of ruby chocolate is the fresh distinctive flavour. It has been described as tasting like raspberry flavoured white chocolate, ending with an almost sour finish. The exact processing method that makes ruby chocolate is quite difficult to find out, as it is essentially being kept a secret.

Since it contains no berries, berry flavour or coloring, experts have speculated how it is made. During the traditional processing of cocoa beans, the beans usually undergo fermentation before they are put out to dry. At this point, the beans taste sour from the fermentation and are a deep red colour. As the beans dry, both of these attributes tend to fade. Experts say that it would seem to be that Callebaut stops the fermentation process early, resulting in the pink colour, and tangy flavour. This would mean that ruby chocolate could be prepared from any cocoa bean and not just a special Brazilian one.