In case anyone was waiting to hear some wholesome news today, well, here it is. We all deserve to enjoy our birthdays in the most special way, surrounded by our loved ones and, of course, plenty of cake. Luckily, that’s exactly what happened to Yulelogs, a sweet seal from the Cornish Seal Sanctuary who recently celebrated his 31st birthday in serious style. The grey rescue seal was not only surrounded by his loving staff friends but was also presented with a giant ice cake filled with his favorite food – fish. The sanctuary definitely knew the way to this seal’s heart and gave him the perfect birthday surprise.

Yulelogs was rescued by a marine park in 1989 when he was just a tiny pup. Unfortunately, the park soon shut down and he was swiftly released back into the wild. However, according to the official website of Cornish Seal Sanctuary, “after such a long time in captivity, he had no idea how to feed himself and had become too used to humans,” Just months after his release, Yulelogs was rescued by the RSPCA after they had received calls from locals saying that “he had been chasing people with buckets on the beach, believing they contained fish,” the sanctuary staff writes on their site. Sadly, when Yulelogs was rescued the second time, he had lost a lot of weight, weighing only around 132 pounds, much less than a grey seal should weigh. “It was apparent he needed care, so the RSPCA asked the Cornish Seal Sanctuary if they would provide a permanent home for him,” reads the website. 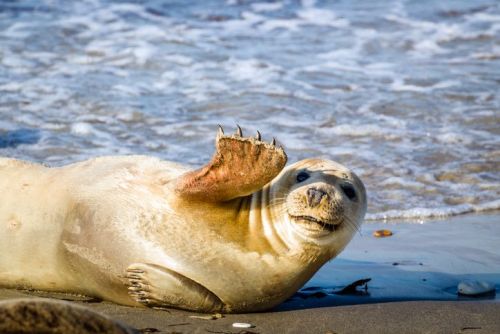 Today, at 31 years old, Yulelogs is highly energetic and happy as a clam. He is beloved by all of the sanctuary’s staff members, as well as visitors to the establishment. This birthday was particularly happy not just for Yulelogs but for all of his human friends at the sanctuary as well, since in the wild, male grey seals normally only live to be around 25 years old. “Yulelogs absolutely loved his birthday cake,” Georgina Shannon, the marketing and media coordinator for the Cornish Seal Sanctuary, told The Dodo. “It’s a great form of enrichment for him also, as it requires a bit of thinking on how to get the fish out of the cake!”