There’s nothing like having a pet in our lives. Those who have grown up with pets, whether cats or dogs, definitely know this to be true. Luckily for one family, this dream came true when a stray puppy wandered onto their porch – and wouldn’t leave. The 4 to 6-month-old Australian Shepherd pup, whom the family affectionately calls Lila, was found hanging out on the front porch of the family’s Greater Houston Area, Texas home on August 3rd. Prior to that, Lila had been seen by locals wandering the streets, poking around another local resident’s driveway. The pup was given some water and food, but soon spotted a nearby porch which looked like the perfect place to rest her tired head. So she went over and laid her head down on the doormat and didn’t budge for several hours. She was seemingly waiting for something or somebody. Unfortunately, the family couldn’t take the dog in, but decided to get in touch with a local rescue organization called This is Houston. Just the other day, the group posted a heartwarming message about Lila’s unique rescue story, which quickly went viral on Facebook – and it’s pretty easy to see why. 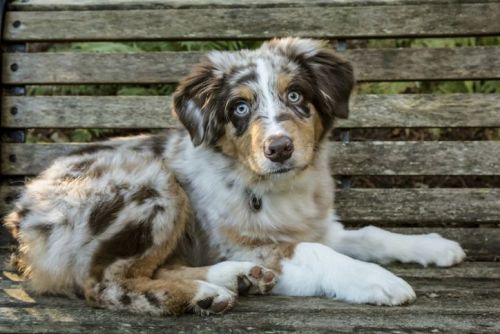 “This puppy showed up in someone’s driveway in La Porte yesterday. They fed her and she wouldn’t leave their porch. They couldn’t allow her inside and they hoped she wouldn’t wander off while they looked for help,” the rescue organization wrote on their official Facebook page. They continued, adding, “We can’t imagine what she thought as she looked inside the glass, but we are thankful she found a family that would get her some help. One of our fosters couldn’t stand to see her continue sleeping on the porch so she picked her up last night and brought her to safety ❤️ She’s a little baby at about 4-5 months old, and she likely has demodex mange. She’ll see a vet tomorrow but today, she’s resting peacefully inside. We’ll get this baby back to health in no time!” The sweet post was followed by a couple of donation links, for those who were touched by the story and would like to help out.