In February 2021, a man noticed a gas leak in his house in Tennessee and called some repairmen to come to fix it. It seemed to him like an ordinary situation: it would take a few minutes to fix and then he would be able to move on with his life. But little did he know that he was about to become a hero.

When the repairmen showed up and took a look at the gas leak, they realized the job required extra help. So they called animal rescue. It turns out a mama bear had been using the man’s basement crawl space as a den for her and her cubs. But, unfortunately, crawl spaces are not safe places for animals to hibernate – so the homeowner and the few animal rescue organizations that came to help had to come up with a plan. They needed to move the bear along. And it was only when she did move, that the crew noticed there were also three small cubs in the hole. 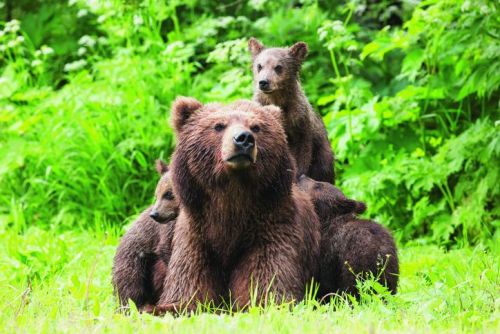 Now that the mama bear was gone, the three cubs were being kept warm in a basket with warm towels while they waited to be taken to a safer place. But soon they were taken to the hospital at the University Tennessee College of Veterinary Medicine (UTCVM), where the doctors could keep an eye on them. About the successful rescue, the Appalachian Bear Rescue told the local press: “The cubs are female, very young (their eyes are not open yet), and they weigh just over two pounds each. They are in good overall health.”