By reaching the summit of the world’s highest mountain on May 12, Lhakpa Sherpa broke her record as the most successful female climber of Mount Everest, little than a week after another Sherpa beat the record for most climbs ever. Mingma Gelu, her brother and trip organizer, confirmed the 48-year-climb, saying she was in good health and safely descending from the mountain. This is her tenth summit of Everest, the most by a woman, and she has always stated that she wants to inspire all women to achieve their goals.

Lhakpa’s efforts and accomplishments have yet to yield fortune or fame. She was born in a village more than 4,000 meters (13,000 feet) above sea level in eastern Nepal’s Makalu area. She is a Sherpa, an ethnic minority descended from nomadic Tibetans accustomed to living in harsh environments at high altitudes. She claims she was born in a cave and has no idea how and when she was born. Her passport, however, indicates that she is 48 years old. She and her three children live in West Hartford, Connecticut, in the United States. 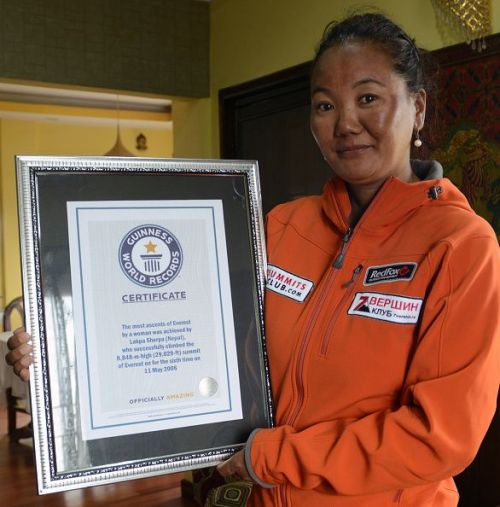 Lhakpa grew up in a patriarchal atmosphere where she was discouraged from pursuing her passion of becoming a climber. Her parents cautioned her that if she tried becoming a mountaineer, she would never marry because it would portray her as too masculine, and villagers told her it would be death if she tried. She shrugged off her fears and reached Everest’s highest ridge in 2000. She broke more records after being the first woman to climb Everest three times in 2003. The Guinness Book of World Records recognized the feat. Her brother and sister joined her on the climb in 2003, making them the first three siblings to summit an 8,000-meter peak at the same time.

Climbing Mount Everest with Sherpa guides is considered a skill. They are primarily Nepalese and play an essential role in assisting climbers from all over the world in reaching the summit. Even though Mount Everest has been climbed over 10,000 times, it remains one of its most dangerous journeys. The climb has claimed the lives of almost 300 people.