Found in lowland forests in Brazil, Bolivia and Peru, the Emperor tamarin is quite an interesting primate. Known for its unusually long white mustache, this adorable species actually earned its name thanks to its facial hair. Apparently, it resembles that of the last German Emperor and King of Prussia, Emperor Wilhelm II. 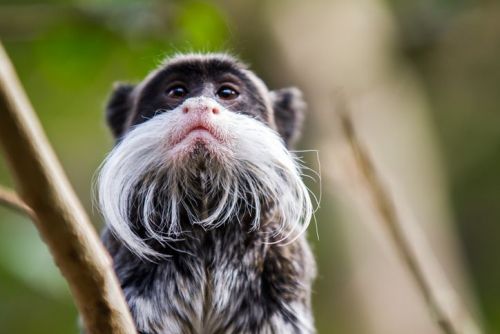 With a tail longer than its body, this tiny creature can grow to 10 inches while its tail can reach 16 in. Even though sight is its primary sense, its sense of smell is also well-developed. Weighing about one pound, the Emperor tamarin eats fruit nectar, gum, and insects. This primate communicates through a series of vocalizations, responding to its own species’ alarm calls as well as Saddle-back tamarins’. Unlike higher primates, the Emperor tamarin does not have a varied array of facial expressions.

Although its population has been in decline due to threats of deforestation, the International Union for Conservation of Nature (IUCN) considers the Emperor tamarin a species of Least Concern. This means there is no need for conservation efforts aimed directly towards the species. In Peru and Bolivia, the primate inhabits protected areas such as Manú National Park and Manuripi-Heath Amazonian Wildlife National Reserve, but there are no protected areas overlapping with the Brazilian population of this species.