The Adorable Family Of Foxes

Shawn Davis, an Illinois local witnessed a rather strange sight back this past May. No, it wasn’t an alien landing, but it was actually two baby foxes playing around close to his backyard patio. Not quite as strange, but still highly unheard of. He was, of course, kind of confused at the sight since he’d never seen a fox before, and especially didn’t expect to see one in a suburban, residential area. And it didn’t take very long at all for these foxes to start feeling at home, coming on a regular basis for a nice visit in the Davis backyard.

Once the two baby foxes become comfortable with the area, realizing that’s not only a super fun place to play around in, but also that it’s a safe place to be, they brought the rest of their fox family along with them. Shawn Davis and his family started to see more and more foxes on a daily basis over time, and it became a regular part of both the Davis and foxes routine. It became clear that the foxes are a family of seven, and that they weren’t planning on going anywhere, anytime soon. 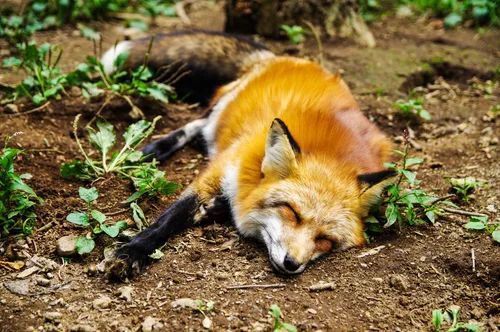 The adorable family of seven foxes includes a mother, father, and five even more adorable children.  Ever since they started visiting the Davis backyard, they’ve come every single day, and appear to be having the absolute time of their lives, playing around and relaxing. Davis believes that since their backyard is both quiet and fenced off, it provides the fox family with a sense of security that they wouldn’t otherwise have. The trees also provide them with a comfortable and shady spot to take naps in. Shawn has also shared that he and his family actually enjoyed their company, especially since with lockdown restrictions, there’s not much going on anyway.