Originally found in several lakes near Mexico City, the paedomorphic salamander known as the axolotl is related to the tiger salamander. They are actually often confused with the larval stage of the tiger salamander and with mudpuppies (a different, unrelated aquatic salamander family). Unlike most amphibians, axolotls reach adulthood without having undergone a metamorphosis, and they remain gilled and aquatic and don’t migrate to land. Sadly, axolotls are listed as critically endangered in the wild, largely due to the introduction of invasive species in their habitat, as well as water pollution from the urbanization of nearby cities.

In order to mate, males perform a ‘hula’ dance as a form of courtship, by shaking their tails and lower body. If a female is interested, she will nudge him with her snout. Once fertilized, an average of 300 eggs are laid. After just two weeks they hatch, and the larvae go off swimming on their own. The main reason axolotls have drawn so much attention is due to their healing abilities. When injured, they do not scar, but rather, they are able to regenerate lost appendages. It can take up to a few months to regenerate their tails, limbs and even the lens of their eyes. 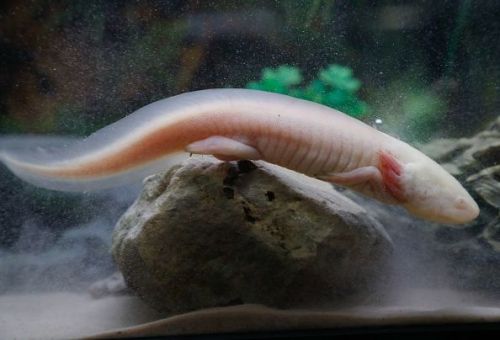 This incredible ability allows them to stay ‘young’ throughout their entire lives; in a phenomenon known as ‘neoteny’, axolotls never outgrow their larval stage. They maintain their youthful feathery gills in what appears like a mane sprouting from their heads. In addition to this, adult axolotls develop functional lungs as well, and can breathe through their skin too. Their food includes insect eggs, small fish, crustaceans and mollusks, which they consume by sucking in. Axolotls often have their mouths open after they swallow food. This, coupled together with the fact that some of them have slightly upturned mouths, makes it appear like they are always smiling.