Canada is known for many things. Some of these things include snow, maple syrup, ice hockey, politeness, and more snow. Yup, it’s a pretty cold country and everyone around the world is well aware of that. Canada is basically the last place we would think of when someone mentions a day out at the beach. However, that’s one stereotype which we might want to reconsider. As it turns out, Canada is actually home to quite a few beaches. One of those beaches is called Sugar beach, and it’s pretty much the most picturesque place on the planet.

Sugar Beach is situated in Canada’s large capital city, Toronto. Every country has its popular tourist attractions and this beautiful beach is definitely one of the city’s most frequented spots. It’s really no surprise why that is, considering the pretty decorative lighting, the white beach chairs, and the pink umbrella tables that line this urban paradise. It’s pretty much every Instagram blogger’s dream destination. While it might seem that this beach’s name derives from ts cotton-candy colored hues, there’s actually another reason behind it: the name is a reference to the neighboring Redpath Sugar’s refinery, another beloved local landmark. 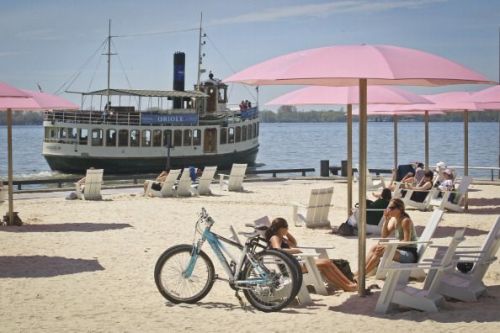 This oh-so-pretty beach is the perfect place to relax and take some aesthetically pleasing snaps for social media. It’s also a great way to enjoy the stunning views of Lake Ontario, However, those who wish to engage in water sports might want to look for another spot. Sugar Beach is designated specifically for relaxation purposes such as socializing on the shore or attending one of the beach’s many local events, such as the Wine and Spirit Festival and the Sail-in Cinema.