Many couples, unfortunately, had no choice but to cancel their wedding plans, putting them off until further notice due to the current situation and changing the set dates of their big days.  But for Lindsey and Bri, canceling their wedding simply wasn’t an option.  After spending countless hours dreaming of and planning their perfect day with even the smallest of details figured out, they weren’t ready to let go so quickly. So while they didn’t exactly have the wedding that they have imagined in a beautiful historic castle, they nonetheless made sure that the show still went on.

After realizing that their set date on February 10th wouldn’t happen, or at least not in the same ways that they have originally wanted, they understood that some changes were going to be made. They, of course, wanted to respect the regulations and keep others safe, while also at the same time wanting to carry on with their marital ceremony without waiting for another future date.  After taking some time to take everything in and adjust to the new reality, the couple gradually came to appreciate a unique idea that their wedding planner had for them before the lockdown- to have the wedding in a drive-in movie theater. This way, they could still get married while still following the rules, as their guests could stay in their cars and witness their nuptials while socially distancing. 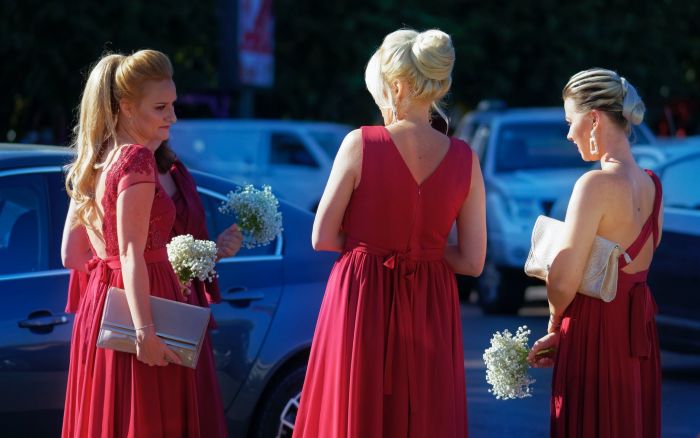 Once the lockdown was lifted, they were eager to get back to the creative backup plan that their wedding planner had for them, setting a new date for the end of April, and starting to plan everything from the beginning.   Lindsey and Bri tied the knot in a parking lot of a drive-thru movie theatre surrounded by nearly 90 cars, and to say that it was magical would be an understatement.  Even though everything that had initially planned for didn’t work out, it still was their perfect wedding, because the love was there, and so too were their friends and family, happy and safe.