The Evolution of the Telephone

There is a lot of controversy surrounding who was first to invent the telephone, but Alexander Graham Bell was the first to patent his invention, thus receiving the credit for the invention. Back in the 1800s, the most popular means of long-distance communication was the telegraph. Bell wanted to try and incorporate the concept of carrying sound waves along the wires. In 1876, the first telephone was born when Bell said “Mr. Watson, come here. I want to see you” to his assistant who heard his request clearly.

The original telephone was quite a bulky device connected by wires to a curved mouthpiece and earpiece. By 1900, there were almost 600,000 telephones part of the system, all of which were connected to a main switchboard. By 1910 almost 6 million phones were part of the same network. Rotary dial phones became more popular in the 1920s, and since they didn’t need switchboard operators, they slowly became the standard telephones. The rotary dials slowly became replaced with dialing pads in the mid-1900s allowing for phones to become even smaller. 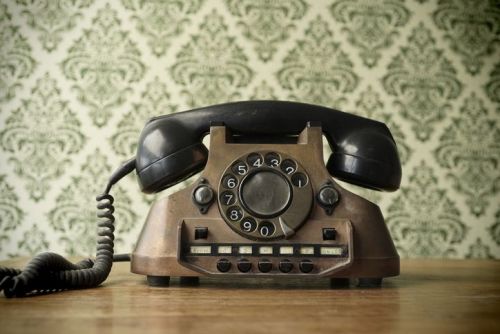 What used to be two separate pieces, the speaker and microphone were now the same piece, allowing freedom to move around while talking. But even so, in the 1980s, cordless telephones were introduced leading to the outbreak of cellphones in the 90s. Phones became more streamlined, allowing for more portable home phones and personal cells alike.

With the turn of the century, cellphones were the new focus, and fewer and fewer people were investing in home phones. Personal cell phones were more than just a device for calls, we now had text messages, games and eventually cameras, all integrated in the palm of our hands. Internet connection was introduced to our devices, and in 2007 the first iPhone was released. The phone, now a smartphone, had transformed into a mini transportable computer in our pockets. With the advancement of technology, there’s very little left that your phone can’t do.