Native to the Socotra archipelago in Yemen, the Socotra Dragon Tree is a very interesting plant. Also known as Dragon Blood Tree, it is named after the red sap that it produces when it’s cut. Legend says that the first Dragon Tree was actually created from the blood of a dragon that was wounded after a fight with an elephant. In ancient times, the sap produced by the tree when it’s injured was believed to have magical and medicinal properties.

The tree’s sap, even without any magical properties, has been used for many years by various people and industries for numerous different purposes. Besides its medicinal use in numerous ailments, this resin has been used since ancient times as a pigment for art, as a dye for wool, as a varnish for items like furniture and musical instruments, as glue for pottery, as makeup, as toothpaste, as incense, and as an ingredient in homeopathy. 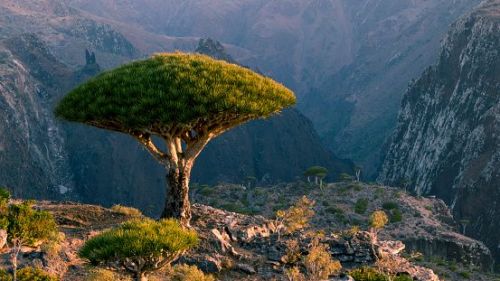 The Dragon Tree is just one of the many unique plants on the island. Thirty-seven percent of the archipelago’s 825 plant species are exclusive to Socotra. Besides, ninety percent of its reptile species and ninety-five percent of its land snail species also do not occur anywhere else on the planet. Due to its natural diversity and cultural pluralism, the area has been designated as a MAB (Man and Biosphere) reserve by UNESCO.