The History of Lego

Considered the world’s largest toy company since 2015, Lego is globally known for its colorful plastic bricks. These playthings were first produced in 1947 and slowly became one of the most famous toys in the world. But the history of the company begins way before that… It all started in 1895, when a woodworking shop called Billund Woodworking and Carpenter’s Shop was founded in Billund, Denmark.

In 1916, Danish carpenter Ole Kirk Christiansen purchased the woodworking shop, which burned down a few years later. In 1932, Ole’s new workshop nearly went bankrupt during the depression, but thankfully he came up with a brilliant idea that would save his business: selling wooden pull toys. A couple of years later, the name Lego is coined by Ole from the Danish phrase “leg godt”, which means “play well”. In 1935, the company creates the Lego Duck, a wooden duck-shaped toy. 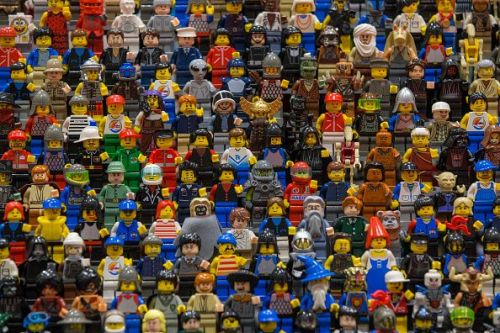 It was only in 1947 that self-locking bricks started becoming a reality. In 1949, Lego released plastic bricks called “Automatic Binding Bricks”, which were only renamed Lego Bricks in 1953. The next year, Godtfred Kirk Christiansen, son of the company’s founder, decided to turn Lego bricks into a toy system. In the coming years, the company started producing different objects for their sets, such as doors, windows, trees, flags, and lights. But even with the production of plastic bricks, it wasn’t until 1960 that Lego discontinued the manufacturing of its wooden toys. A few years later, in 1964, the first Lego set with instruction manuals was introduced, paving the way for more intricate sets for older children and even adults. By the beginning of the 1970s, the company had already grown to 1000 employees, with toys being sold in numerous countries around the world.

The minifigure was officially launched in 1978. With bendable limbs and hands that can grab utensils, Lego minifigures are still considered the company’s second most important design – after only the plastic brick itself. The following years saw the production of hundreds of sets, the release of feature films, and even the creation of theme parks around the world. Today, over a decade since the beginning of this story, we can’t wait to see what Lego has in store for the future.