The History of S’mores

S’mores are an intrinsical part of camping. Graham crackers, marshmallows and chocolate bars are on every camper’s shopping list. This has been the case for as long as we can remember, but when did s’mores actually get invented? The truth is the invention of s’mores wasn’t documented in someone’s diary or on a patent request, so no one knows for sure who created this deliciously gooey dessert. 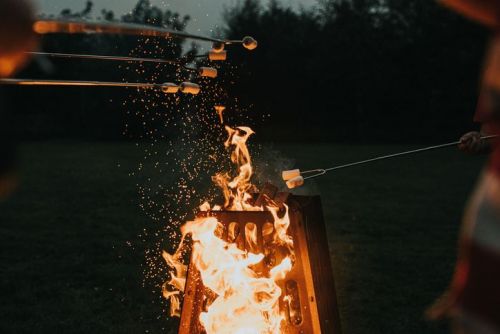 The first s’more recipe as we know it today appeared in the early 1920s in a book under the name “Campfire Graham Cracker Sandwich”. The author claimed the recipe was especially popular with Boy Scouts and Girl Scouts, indicating it had already been around for a while. A few years later, a 1927 cookbook called Tramping and Trailing with the Girl Scouts published a “Some More” recipe. It was only in 1938 that the contracted term “s’mores” appeared in a publication aimed at summer camps.

However, the concept of s’mores had already been around for at least a decade before making its way to cookbooks. Confections including all three s’more ingredients, such as Mallomars and Moon Pies, were first sold publicly in the 1910s. Due to lack of documentation, no one will ever know whether these sweets inspired the invention of the campfire treats in their current form or s’mores inspired the creation of the confections as ready-to-eat treats.