The Hospital That Hired A Security Cat

Most people don’t love going into work. However, there are certain factors that determine whether or not we have a good office environment, and one of those factors is our colleagues. If we enjoy seeing our coworkers on a daily basis, our 9-5 shift will automatically be way more appealing. Well, at Epworth Hospital in Melbourne, Australia, that is certainly the case for their many employees. Just recently, a new security guard has been hired to patrol the hospital grounds, and he just so happens to be a four-legged, fluffy feline. Yup, this hospital hired a cat as their newest security guard, and needless to say, people are pretty thrilled to have him on the job.

Epworth Hospital is situated in the city of Richmond, Melbourne. Recently, neighborhood residents and hospital workers have been seeing the red and white tabby cat, affectionately called Elwood, hanging outside the building’s main gate. Apparently, the fluffy feline has been manning the hospital entrance almost every day for the past year. Apart from watching people going in and out of the building, Elwood’s daily routine also includes chilling in the nearby bushes, as well as basking in the love and attention lavished on him by his many adoring fans. 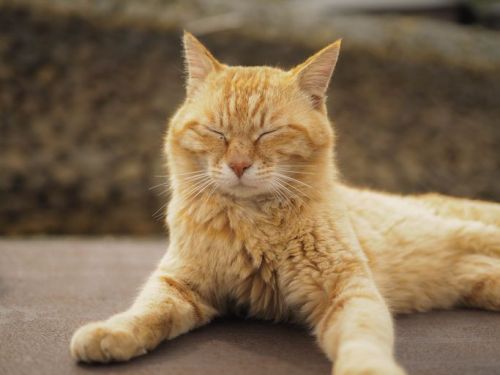 One day, hospital employees came into work and noticed that Elwood was wearing a collar with a shiny new tag attached to it. Upon closer glance, one employee realized that Elwood was now officially a part of the Epworth security guard team. Considering the tabby cat’s loyalty to guarding the hospital, he definitely deserves this great honor. These days, Elwood’s job hasn’t changed much. His daily tasks are still pretty much the same. When he isn’t people-watching, Elwood can be found lazily basking in the sun on his “breaks.” The difference is that he is now flaunting his official security badge with pride, and everyone is living for it.