Theloderma corticale is the scientific name of the Vietnamese mossy frog. This species is absolutely fascinating for many reasons, but the main one is its appearance. Many animals out there have the ability to camouflage into their environment when they need to, but very few of them look exactly like a part of their home. Even when removed from its natural habitat, the Vietnamese mossy frog still looks like moss growing on a rock. It is thanks to its mottled green and brown skin that this frog camouflages perfectly in the evergreen rainforests and subtropical forests of northern Vietnam and China that it calls home.

Also known as the Tonkin bug-eyed frog, this frog is an insectivorous animal. It has large sticky pads on its toes and a soft underbelly that allow it to adapt to its environment. Besides its appearance, another cute detail about the Theloderma corticale is its size: this frog measures about 2.4 inches in length. Due to its minute size, this semiaquatic frog can be found in caves, steep rocky cliffs, rock cavities, hollowed logs, and even tree holes. Combining its tiny size and amphibious nature, finding a Vietnamese mossy frog in the wild can be quite complicated – it tends to hide underwater with only its green and black eyes poking out. While locating this frog might be a hard task, hearing one is easier. Its call is so potent it can travel 10 to 13 feet! 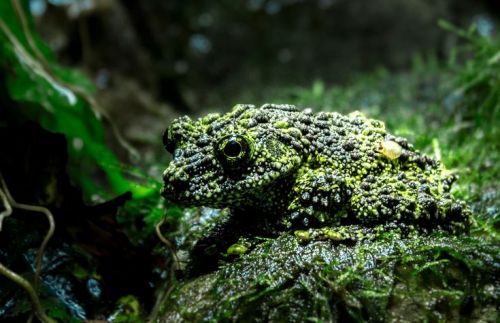 Although its population is slowly in decline, the Theloderma corticale is still classified as “of least concern”. To keep the mossy frog population from going extinct, Surinam has protected the species, as well as international trade. Besides, organizations in the United States and Surinam run an active captive breeding program for the species.