This Little Bird Looks Just Like a Cotton Ball

Few things in the world are cuter than the long-tailed tit. This tiny bird is so round and small, it looks exactly like a little cotton ball. Its body is so little, in fact, that it is actually shorter than its tail: while its tail is about 3 inches long, the long-tailed tit is about 2 inches tall. And the most impressive part of all? It weighs almost the same as a cotton ball too, ranging from .24 to .35 ounces. 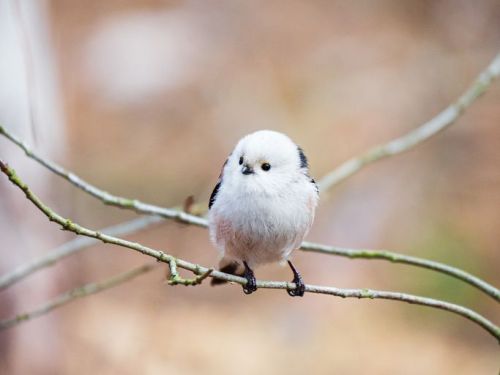 This little bird is most commonly found in Northern Europe, but lives all around the European continent and the Palearctic realm. It is relatively easy to spot a long-tailed tit: it usually flies around woodland, hedgerows, gardens and forest habitats. Its most common plumage color is black and white, but you can find many color variations in the wild, including gray and pink hues. The long-tailed tit tends to form compact flocks of about twenty birds in order to occupy and defend territories against neighboring flocks.

The long-tailed tit is known for its high-pitched chirp and its nests. When it comes to making a safe home for its eggs, it builds a domed nest using moss and camouflages it with cobwebs and lichen. In order to make its nest as comfortable as possible, the long-tailed tit lines it with over a thousand feathers.