This Teenage Pilot Flew Solo Around the World

Born in Brussels, Belgium, in 2002, Zara Rutherford is daughter to two pilots. Her father, Sam Rutherford is a British professional pilot, and her mother, Beatrice de Smet is a Belgian recreational pilot and a lawyer. Rutherford started learning to fly from a young age, and at just 14 she began training for her pilot’s license, which she successfully achieved in 2020. Rutherford completed her A levels at a girls’ school in England, where she studied Mathematics, Further Mathematics, Economics and Physics. Her dream is to study computer science or computer engineering and one day become an astronaut.

On August 18 2021, Rutherford left Belgium, flying solo and headed West. She embarked on what was supposed to be a three-month challenge to fly around the world solo. Her trip had her flying 32,000 miles through new territories and varying weather conditions. She managed to navigate through wildfire smoke in California, and thunderstorms which forced her to extend her stay in Colombia. She faced subzero temperatures, with the ground temperature at -31F in Siberia and -4F in the air. 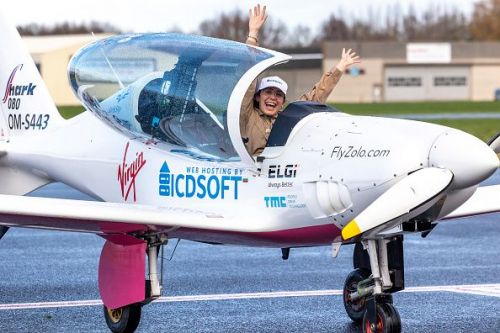 Rutherford experienced an earthquake in Veracruz, Mexico, that shook her sixth-floor hotel room, and sustained a flat tire in Singapore which left her stranded over Christmas. In the end, due to these weather delays which in turn had a knock-on effect, Rutherford’s trip extended to five months. This included over 60 stops, and 1 month of being stuck in Nome, Alaska, and 41 days in Russia with visa difficulties. She arrived back in Kortrijk, Belgium on January 20 2022, completing her challenge.

While the youngest man to fly solo around the world was 18 years old, before Rutherford, the youngest woman was 30. Rutherford not only broke this record, but also became the first to circumnavigate the world in a microlight, and the first Belgian to circumnavigate the world solo by air. Rutherford aims to inspire other girls to get into STEM (science, technology, engineering, mathematics) careers. She wants to show young women that they can be ambitious and bold and achieve their dreams too.