What’s In A Smörgåsbord?

You may or may not be familiar with the term ‘smorgasbord’, but either way, we’re gonna give you the lowdown on what it means, where it came from, and what delicious delights await those that want to eat. The word smorgasbord is actually Swedish, and comes from ‘smorgas’ which means ‘buttered bread’ or ‘open sandwich’ and ‘bord’ which means ‘table’. Having originated in Sweden, this Scandinavian meal is similar to what we refer to as a buffet.

In the sixteenth century, members of the Swedish upper class used to serve a small buffet on a side table prior to sitting down at the dinner table. This usually entailed liqueurs, with bread, butter and cheese. In the mid-seventeenth century, the food moved to the main table, making the smorgasbord now popular. The types of food offered began to change, and it was soon served in hotels and railway stations as an appetizer. Smorgasbords finally became the main course during the 1912 Olympic Games, when restaurants in Stockholm made the switch. 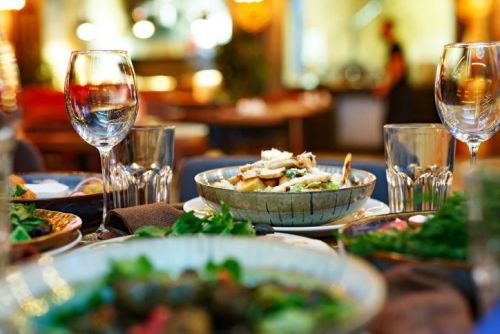 Traditionally, multiple dishes are served, both hot and cold, covering a variety of different foods on offer, with bread, butter and cheese being constants to a smorgasbord. In what is typically a celebratory meal, guests are able to help themselves from the dishes laid out, customarily beginning with the cold fish dishes. It is then accepted to continue with other cold dishes for subsequent courses, before moving on to the hot dishes. Interestingly enough, dessert is not always required.

Serving your own smorgasbord isn’t too tricky. Thanks to its history, you can choose if you want to go old school and serve cold appetizers such as pickled herring and smoked salmon, or go full out and make a buffet-style meal out of it. You can include more cold dishes like cold meats, pates and salads, but also include hot options like meatballs or marinated fish and potato casseroles. The main thing to keep in mind is that a smorgasbord is a bit more elegant than a buffet. Think tapas-style small plates, rather than people stuffing as much food as they can onto big plates, and then just go for it.