This brief orientation to Korean cuisine will offer you all the basics you need, whether you want to eat in a Korean restaurant, visit Korea, or cook your Korean meals at home. Korean food has undergone significant changes over time. Hunting and fishing were the primary sources of sustenance in prehistoric Korea. Crops such as beans, rice, wheat, and other grains were produced later (during the Mumun period). During the Goryeo period, noodles, grilled meats, mandu (dumpling), and black pepper were introduced. The new world produces such as potatoes, sweet potatoes, squash, tomatoes, corn, chili peppers, and peanuts reached Korea due to trading links with Asia and Europe.

The numerous side dishes (banchan) served during meals distinguish Korean cuisine from other cuisines. The number of side dishes can range from two to twelve, but most meals include at least one. When you dine at a Korean restaurant, you will be served various side dishes in small bowls before your main course. These can range from vegetables to meat to seafood prepared in multiple ways. There are no discrete courses in Korean cuisine like there are in Western cuisines because everything is given simultaneously. 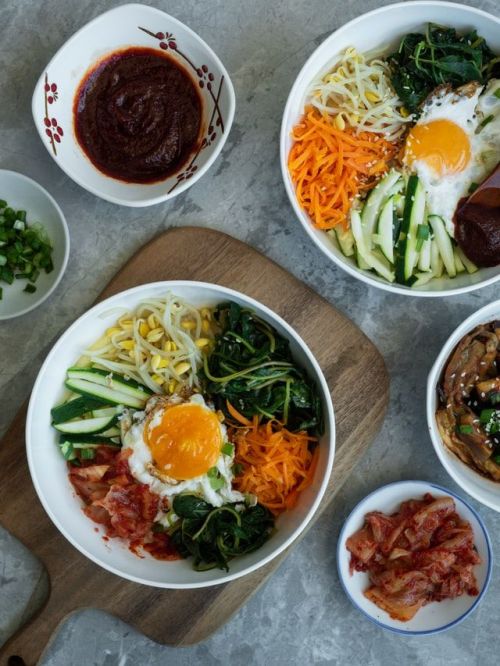 As South Korea’s cultural market continues to export pop culture, music, TV dramas, and films worldwide, the Korean Wave is sweeping the globe. As a result, Korean cuisine is gaining popularity these days. Almost every Korean meal starts with rice. Noodles are occasionally substituted for rice, but everyone eats a bowl of rice with their meal for the most part. There are also several low-carb alternatives. Each participant will usually have a bowl of soup or stew as well. Side dishes and the main dish or dishes–meat, fish, or tofu–are all served family-style in the center of the table.

Many side dishes are pickled, salted, or fermented, and many are spicy, as Koreans have mastered the food preservation technique over thousands of years. Kimchi, Korea’s famous spicy cabbage, comprises over a hundred different veggies, including some that aren’t hot. Many of the side dishes are usually served warm or at room temperature, despite Korean stews and soups being served hot (nearly boiling). There is no need for a knife because everything is chopped into bite-sized pieces, including meat and poultry. Koreans are also good at using chopsticks, so if the meat is too large or a full grilled fish is provided, it can be split with chopsticks.