Miles Scott, aka Batkid, was diagnosed with lymphoblastic leukemia at 18 months old. After several years of chemotherapy treatment, followed by 5 years of remission, today he is considered cancer-free. Throughout his treatment, he was fascinated with superheroes, and their perseverance to fight crime and save the day. When the San Francisco Make-A-Wish foundation asked Miles what he wanted, he said he always wished to be Batkid, the sidekick to Batman.

In one of the most elaborate Make-A-Wish projects ever staged, on November 15, 2013, San Francisco was transformed into Gotham City (the home of Batman) for the day. Through the aid of social media, over 12,000 volunteers signed up to take part, far exceeding the few hundred they expected. Volunteers showed up at multiple venues, some dressed as superheroes themselves, in order to cheer on Batkid. 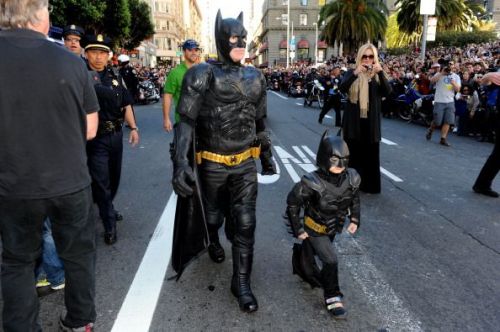 While watching the local news in his family’s hotel room, the broadcast was interrupted by the chief of the San Francisco police appealing for help from Batkid. Miles was escorted in a Batmobile to help untie a damsel in distress on the train tracks and helped disable a plastic bomb replica. He then had to help stop The Riddler from robbing a bank vault, and chase The Penguin across San Francisco and free the kidnapped Lou Seal, San Francisco Giants’ mascot. Many elected officials and members of law enforcement took part in the event. To commemorate his valiant efforts, Batkid was awarded a key to the city, presented by the mayor. He received a video Tweet from President Obama and an FBI ‘raid jacket’. The San Francisco Chronicle covered the events in a live video blog, and produced a special edition ‘Gotham City Chronicle’ with the headline ‘Batkid Saves City: Hooded Hero Nabs Riddler, Rescues Damsel in Distress’.

Some of the services for this day were donated, and the remaining costs were covered by donations from philanthropists. In the weeks after the national coverage of Batkid, Make-A-Wish donations were greatly increased. In 2015, the story of the events of this special day was told in the documentary film, Batkid Begins. The family was all grateful for this special opportunity, providing them with some closure and celebrating the end of three years of treatment.