Over time, we have successfully domesticated dogs. Long gone are the days when wild dogs and humans lived separate lives. We took them under our wings, brought them into our homes, and treated them as one of the family. At some point along the way, dogs have started behaving like us too. Have you ever caught your dog sitting upright on the couch, with his stomach facing the TV, or sitting at your computer desk as if he’s about to purchase something from Amazon?

Do you know that old joke about how pets look like their owners? Well, this isn’t just a coincidence, research has shown that humans are more likely to choose dogs with characteristics that remind them of themselves. Although this isn’t a bulletproof case, pets are often chosen because of their physical attributes, and studies have shown for example, that an overweight person will have an overweight dog.

As a species, dogs respond extremely well to conditional behavior, this is why it’s relatively easy to train them to do things. They are very quick to mimic behaviors, and are great at picking up on emotional cues, yet another reason they make such loveable pets. If you combine all of these attributes with the fact that most pups look like their owners, you could easily end up with a dog version of yourself.

Dogs are quite smart, and not only do they learn from being taught, but research has shown that dogs will even try to mimic what their human has done, simply by watching them perform a task. Our furry friends are seemingly extremely intuitive, they are quick to learn facial expressions and read people’s emotions. By observing their humans, a dog can learn what works and what doesn’t. The closer the bond between the human and the dog, the likelihood increases that the dog will try and mimic its owner. 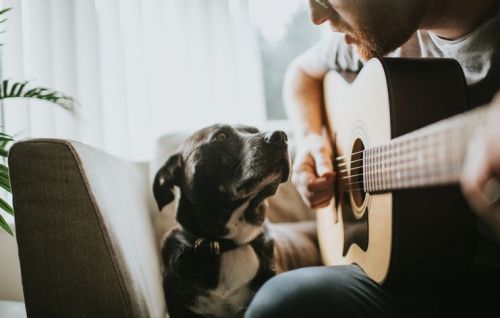 All this means that without even realizing it, we are training our dogs. Simple acts like a belly rub or a cuddle when you’re watching TV, or ignoring him when you’re cooking, teach him when he should and shouldn’t be around. Dogs learn from people’s reactions, and they too, will repeat behaviors that make people laugh, just for the attention. So whether you have a mini version of yourself or not, just be mindful that they’re learning from everything you do.