Many people care about animals and try to do as much as they can to provide them with safe and good lives. This kind of care is expressed in many ways. Some people foster homeless dogs to make sure they don’t go hungry and have a warm bed to sleep in. Some people pick up trash on their local beaches so that sea turtles and fish aren’t harmed. But not many people would be willing to walk around with a duck egg nestled in their chest for 35 days. But that’s exactly what one mother of three did, and miraculously, she saved the baby duck inside.

Betsy Ross and her family had gone to a nearby park to play pickleball when suddenly, they noticed that some duck nests had been smashed up by kids playing there. Fortunately, Ross realized that one egg had remained mostly intact, save for a small crack, and she decided that she had to do something. The local animal shelters wouldn’t take in an egg, but they did agree to take in the baby duck if she was able to somehow hatch it. Ross then made a decision that she was going to carry the egg around with her until it hatched because it would need her warmth to survive. Seeing as she couldn’t afford an incubator, the inside her shirt was the next best place she could think of. The solution was certainly was no replacement for the baby duck’s mother, but it would have to do. 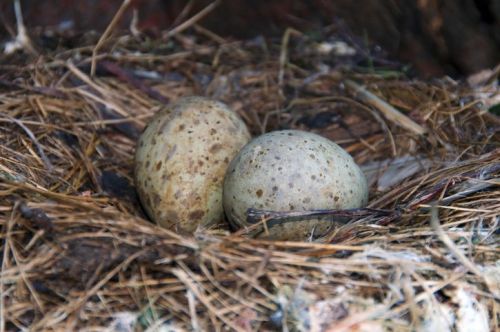 35 days later, Ross began to hear small peeps, also known as pipping, and saw the baby duck’s beak start to push out of the shell lining. She laid the egg in a box and waited. For an entire day, nothing happened, so she called the vet to see if something was wrong. Apparently, the little duckling was caught in the shell’s membrane and couldn’t breathe. Ross had to peel away at the shell and make sure that its tiny nostrils were able to get air. Eventually, after more waiting and coaxing, the baby duckling was finally born. For the first few days, he didn’t move and Ross had to help him drink water. But then one day, she woke up to an amazing surprise: her baby duckling had gotten up and was walking around on his own.

Over the next few days, Ross let him swim in tubs and mud puddles, and take naps with her after playtime was over. The duckling loved to follow Ross around and would scream and make crying noises whenever she went away. This baby duck clearly saw Ross as his mother, since she was the first person he saw opened his eyes. Today, the baby duck is all grown up and lives on a rescue farm that is not far from the Ross family home. He has a new human friend who he has bonded with and is set to live a pretty fabulous life.